Commemoration of 100th anniversary of **the birth of Nelson Mandela

All Together in Dignity Ireland and the Irish End Poverty Day Committee invite you to the commemoration of 100th anniversary of the birth of Nelson Mandela (#Mandela100) on the United Nations' Mandela Day!

Mandela Day 2018 will be a very special one as it is the 100th birthday of Nelson Mandela and the world will be marking it in a ''loud'' way. It is also the Mandela Day of the year of the 70th Anniversary of the Universal Declaration of Human Rights0!

Following the call of the South African Nelson Mandela Foundation and its #ActionsAgainstPoverty campaign, ATD Ireland the Irish End Poverty Day Committee invite you to mark the day on Custom House Quay inspired by the 'Make Poverty History' speech by Mandela in Trafalgar Square in 2005.

The momentum of the day from 5.30pm to 6.30pm will be a symbolic 'Long Walk to Freedom' from the Famine Statues to the Human Rights and Poverty Stone on Custom House Quay.

The participants will be invited to walk together the 40 meters from the Statues to the Stone while joining some songs and listening to some readings from Nelson Mandela's book 'A Long Walk to Freedom''. Some guest speakers will be invited to speak at the start and at the end of the march (Guests invited: the Dunnes Store Strikers,...). The final moment of the event will be the broadcasting of the Mandela 'Make Poverty History' speech.

Also on the day:

two free workshops will be facilitated under two temporary pop-up shelters/gazebos equipped with tables and chairs and installed on the quay close to the Human Rights and Poverty Stone :

- workshop A: discover the Mandela Legacy and collection of messages "From Dublin to Mandela: It's in your hands"
- workshop B: ''Your Rights Are Written in Stone'' workshop to raise awareness about the End Poverty Message of the location with the Famine Statues and the Human Rights and Poverty Stone.

The event is supported by a small North East Inner City grant from the Trade Union FORSA and by the NEIC programme. Contact: Pierre KLEIN - 089 440 15 23 - pierre@atdireland.ie 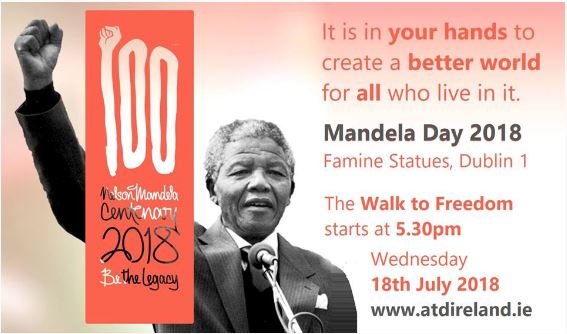